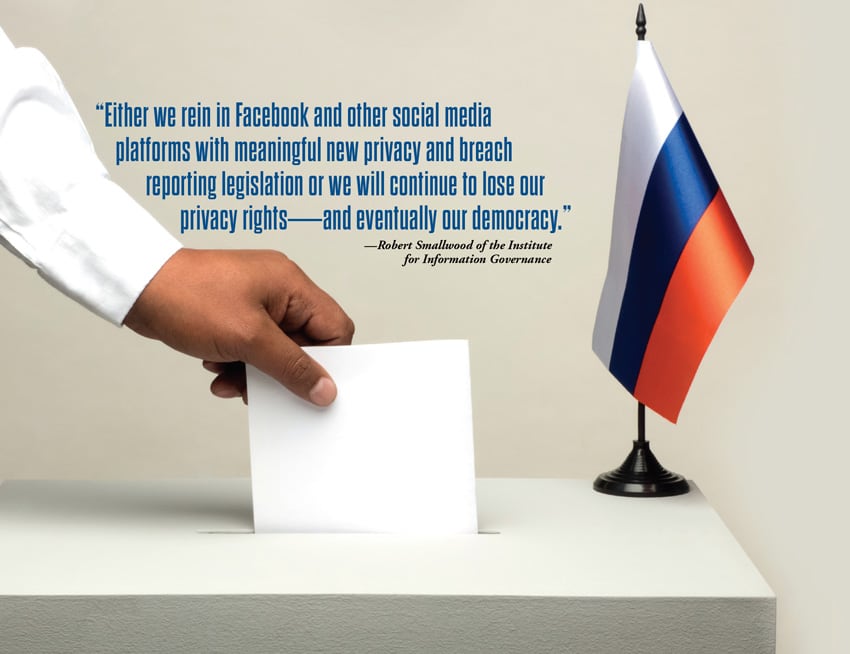 A New Kind of Cold War?

Most Americans don’t remember the Cold War and détente with Russia—except perhaps for a reimagining like FX’s stellar series, The Americans. However, the recent attention Russian influence has received in the media conjures the feel of a digital version of spies and dead-drops. The most pressing question is: how deep and far-reaching are these efforts? Will they affect the 2018 midterm elections—and beyond? Have we lost control of our media and our election process? But more importantly, what are the preventative measures being taken to safeguard against future espionage?

Truly, Facebook and other digital platforms could have had an effect on the election. Billions of clicks on fake news had to have some impact. Obviously, if clicks had no impact, there would be no advertisers. But the depth of the “Facebook Effect” remains unclear, as real efforts into investigating are stymied by partisan posturing, Wall Street favors, and a reluctance on the part of tech giants to own any responsibility for how information is shared at viral speeds. Certainly it can (and likely did) shift political opinions. This information, which is apparently available to those who plant surveys inside Facebook (which they then can sell to advertisers or rogue operators), represents the kind of lever that can have a domino effect in crumbling the roots of our democracy.

What does this have to do with information privacy? Everything.

Knowing that America’s information is for sale, or is easily accessible, is an invitation for foreign governments to attempt to influence our elections—and it won’t only be Russia lurking in the shadows. The West has a long-standing tradition of influencing elections in South America and the Middle East through economic and covert means; here, we can see how foreign governments with InfoSec expertise could influence how our country is governed.

If social media platforms are being used as a vehicle for foreign governments, as the Justice Department’s Russia probe suggests, then what role does information sharing represent to our republic and the very nature of democracy? There are hard questions to ask. Is Facebook a threat to American democracy? Is regulation the answer? Or perhaps something more serious, like breaking up the Facebook juggernaut or shuttering those virtual doors that make creeping in the digital night simple for foreign governments.

It is certainly food for thought.

Sen. Ron Wyden (D-OR), leading up to Zuckerberg’s congressional testimony, offered his thoughts about what to do with Facebook:

“There are going to be people who are going to say Facebook ought to be broken up. There have been a number of proposals and ideas for doing it, and I think unless [Zuckerberg] finds a way to honor the promise he made several years ago, he’s gonna have a law on his hands. […] I think we’ve got to establish a principle once and for all that you own your data, period. What does that mean in the real world? It’s not enough for a company to bury some technical lingo in their [terms of service] … It’s not enough to have some convoluted process for opting out.”

A Digital Monopoly on Personal Data?

With Facebook front and center as the tech boogeyman of the year, we need to remember that they might not be the champions of innovation that has been built up in the public consciousness prior to their very public dressing-down. In many ways, they have created a kind of digital monopoly by cannibalizing more than 60 companies, including:

Beyond that, Facebook login credentials are used in hundreds of popular apps like Words with Friends or Venmo.

It conjures up a kind of information-hoarding that cannot continue unchecked. And the Facebook social platform is not the only arena in which information is tracked and sold: Instagram, Tinder, and other complementary sites are doing much of the same in the name of newsfeeds, user experience, and, most importantly, ad revenue via clicks. Additionally, they can monitor connected devices in your home through Wi-Fi connections that do not even have a Facebook app installed. Talk about invasion of privacy. That means they can monitor your kid’s cellphone, your smart TV, and even your Wi-Fi connected security system or doorbell.

Makes you want to go back and take a closer look at their privacy notice, doesn’t it? Unfortunately, it never offers you options. It is always “take it or leave it” and once you sign up, they keep changing the rules to suit their own purposes. Consideration must be given to people’s privacy rights in order for these bad privacy practices to change.

If you’re reading this, then it is likely that you have a vested interest in IG. Simply put: Facebook’s failures can be measured in their weak controls and a lack of an effective IG program. For the uninitiated, Information Governance is simply minimizing information risks and costs while maximizing information value. Well, maybe they got the value part right, but IG programs are about the security of information as well as the control of information. IG programs help companies meet compliance and legal demands while eliminating unneeded and outdated information in order to focus on leveraging high-value information across business units. Social media companies must do a better job of knowing what information they have, monitoring and controlling it, and taking proactive steps to guard user privacy.