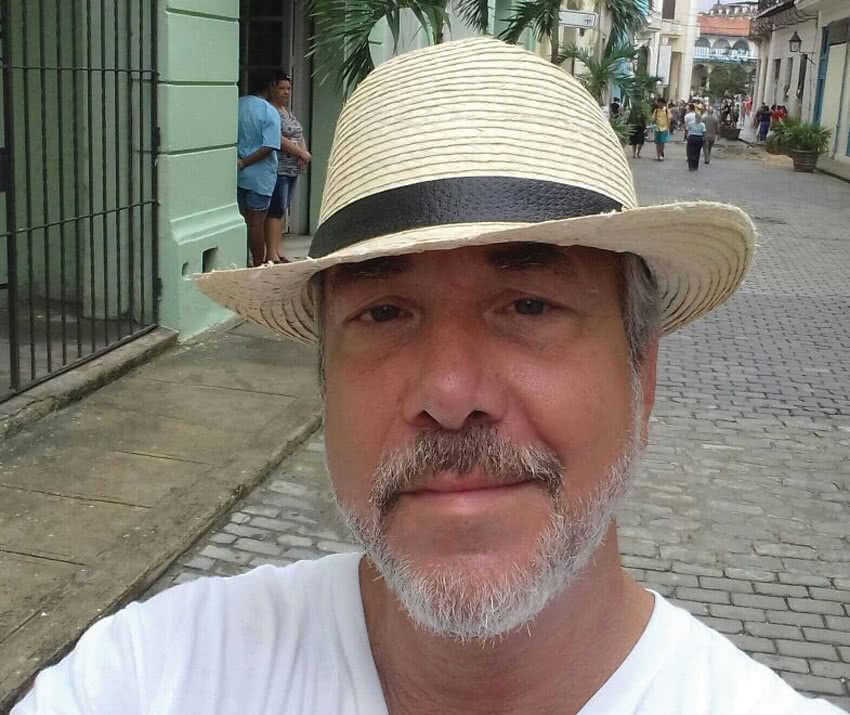 In addition to teaching IG courses, he consults with Fortune 500 companies, hospitals and governments to assist them in launching IG programs. Mr. Smallwood has published more than 100 articles and given more than 50 conference presentations. In addition to his nonfiction biz/tech books, he has published a novel, a theatrical play, and the first published personal account of Hurricane Katrina.

We caught up with Robert Smallwood in Todos Santos, Mexico, where he had gone to find the muse while working on a novel.

InfoGov World: Where are you from? Where did you go to school?

Robert: I was born in Davenport, Iowa—also the birthplace of jazz great Bix Beiderbecke—and raised on the banks of the Mississippi River, in an area on the Iowa-Illinois border called the Quad Cities. It’s about 3 hours southwest of Chicago, so I grew up being a Cubs fan. Sometimes, my dad would take my brother and me to games, and when I was in high school I’d drive up with a group of friends to see a ballgame.

I went to the University of Northern Iowa and lettered in cross-country my freshman year, but with my academic workload and a series of injuries, I quit running and focused more on school. I spent my junior year at U Mass/Boston on an exchange program, and then finished up with B.A. degrees in Management and Psychology from UNI.  Ten years later, I took night classes to get my MBA in International Business at Loyola University in New Orleans. Since I had a full-time job, was a single dad, a Big Brothers volunteer, a basketball coach for seven-year-olds, and later married with a family of five, it took me eight years to finish!

How do you define IG?

How did you make your way into the IG discipline?

I was working with Wang Labs in the late 1980s when they came out with the first document imaging systems, about a year ahead of IBM. I learned everything I could about imaging and in 1990 went out on my own as an independent consultant. Document imaging, workflow, and then document management and enterprise report management eventually developed into ECM suites. I was heavily into ECM and content management consulting in the late 1990s and early 2000s, regarded as one of the top experts in the world, when I was on the AIIM Board. Then that market consolidated drastically, and the broader need for IG came into view. I’ve researched email archiving and e-document security since the early 2000s, and I continued to research and write reports on subtopics in the IG discipline like IG for SharePoint, IG for the Cloud, Social, Mobile, etc. In 2011, I signed a three-book deal with Wiley & Sons to write a series of books on IG topics including e-document security, electronic records management, and the first textbook on IG. I’m not sure I would have gone through with it if I had known how much work it was going to be! Publishers are real sticklers for detail. But the three books, two of them in the Wiley CIO Series, were published from 2012-2014—over 1100 pages in all.

What major trends or influences have you seen in the IG market space?

In the past year or so, there has been a sort of “perfect storm” that has fueled activity in the IG space. A combination of compliance pressures—notably GDPR—plus privacy and cybersecurity concerns, Big Data volumes, and the increasing recognition that information itself has value have contributed to a substantial increase in the number of organizations implementing IG programs.

So is there a new focus on privacy that is driving all this activity and growth?

Privacy is a major driver, and it will continue to be one.  There is new privacy legislation in California. And big tech companies like Google and Facebook are now lobbying congress to try to develop federal privacy legislation on their own terms—before consumers are screaming for it. Further, the 2016 hacking and theft of proprietary election research by Russian spies has brought many more into the privacy and cybersecurity conversation.

A first step in the GDPR compliance process is to conduct an inventory of an enterprise’s information assets to create a data map showing where all incidences of data are housed. This is commonly the first major implementation step in IG programs, so the IG discipline and support for IG programs made substantial strides in 2018 and the lead-up to GDPR going into effect. Progressive companies actually develop an Information Asset Register, which is a sort of  “General Ledger of information assets” that tracks where all information assets physically reside, whether they contain sensitive or confidential information, and their lifecycle requirements.

What is the most exciting development in IG of late?

In a word, infonomics. IG programs are not only about managing risk and costs, but also about optimizing and finding new value in information. The concept of managing and monetizing information is core to the emerging field of Infonomics, which, according to Gartner’s Doug Laney, is the discipline that asserts “economic significance” to information and provides a framework to manage, measure, and monetize information. Laney published a groundbreaking book in 2018, Infonomics, which delineates infonomics principles in great detail, providing many examples of ways organizations have harvested new value by finding ways to monetize information. I was fortunate enough to get to discuss these topics recently with Doug over breakfast in Chicago.

Your next book is about IG in healthcare. How did you become interested in that market segment?

When I learned that medical mistakes are the third leading cause of death in the U.S., killing over 250,000 Americans annually.  In fact, I was the victim of a couple of serious medical mistakes that almost killed me. So last year, I began to research IG in healthcare, which is a segment I focused on heavily in the 1990s. There was only one book on that topic; I found it to be complex and academic. So, I thought there was a market for a practical, clearly-written guide for IG in healthcare that would help address this issue of medical mistakes in the U.S. Hopefully, my new book will help save hundreds of thousands of American lives over the next decade.

What is one hobby or activity that you enjoy?

Well, I love to travel. And about twice a year I go off some place exotic just to do some writing—not tech writing, but working on fiction. I’ve written a novel and a play, and have a Mexico novel I’ve been tinkering with for 10 years. I even wrote a New Orleans mafia screenplay that was once optioned. I think writing fiction helps me to focus on the cadence and rhythm of each sentence, which helps make my nonfiction writing better, more readable.

Where have you gone off to write?

Havana a few times, for as long as three weeks; a year on and off in the beautiful mountain community of San Miguel de Allende, Mexico; two months in Panama, at Bocos del Toro and the idyllic San Blas Islands off the Caribbean coast, including a week on a small yacht, where we ran into some very rough seas one night. Most recently, right here in Todos Santos, Mexico, which is about an hour and a half north of Cabo San Lucas. It’s an old fishing village, a small enclave near the coast where there are a lot of artists. I like to be around creative types when I am doing creative writing. And I was a little curious to see the Hotel California, even though supposedly it isn’t the one the Eagles were singing about. I stayed in this cool old mansion owned by a sugar baron, which is now the Todos Santos Inn. There are no TVs or phones in the room, and there is a writing desk. Great place to write. They even have a portrait of Shakespeare in the bar!

IGW: What is one thing that your colleagues in the IG space probably don’t know about you?

About 17 or 18 years ago I had a grand mal seizure in a coffee shop in New Orleans. When I woke up in the hospital, the doctors told me I had terminal brain cancer and less than 30 days to live. They showed me an MRI of a large tumorous mass in my brain. I called my oldest son up to the hospital room to tell him that Pop was leaving soon. My mother and sister flew in and we started to make arrangements. Then, about a week later, the doctors said they ran some new tests and gave me antibiotics, and the mass in my brain shrunk. They concluded that I only had a serious brain infection caused by bacteria in the water (I had been living in a log cabin north of New Orleans that used well water). Many people might have sued the doctors for the stress of a terminal diagnosis, but I was overjoyed to have a second chance. I am more grateful for each day than I ever was. I try to make the best use of my time.