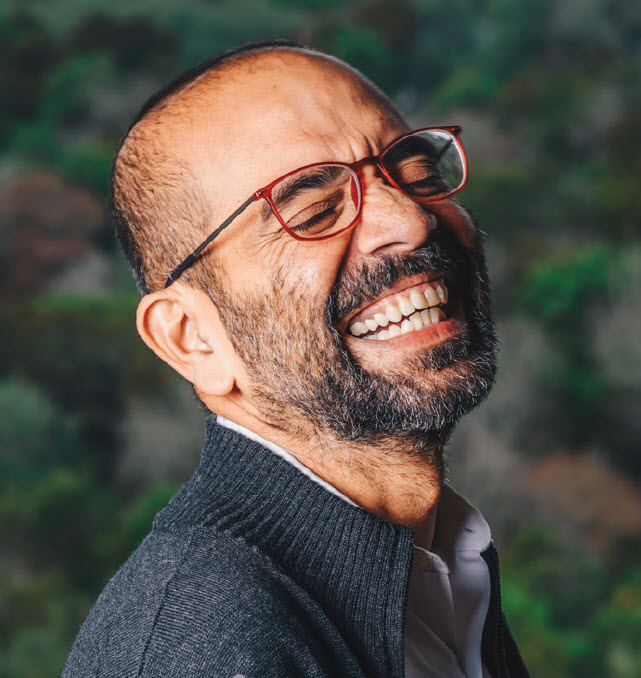 Growing up in poverty in Bombay, Ashish never forgot how it felt to stand in food lines to survive. He went on to build a successful career as a serial entrepreneur, serving as founder and CEO of multiple technology startups delivering global mobile solutions. In 2012, he sold his last tech company to a multi-billion-dollar consulting firm and soon after, BanQu Inc. was born.

Recognized for its groundbreaking for-profit/for-purpose innovation, BanQu has been the recipient of many awards including the MIT Enterprise Forum Pan Arab Innovate for Refugees Award, an Innovative Finance Grant from the Rockefeller Foundation, Best of Show at 2016 Finovate Awards, and 2016 Cashless World Award.

In addition to his role at BanQu, Ashish is also a senior strategic advisor to the United Nations on the Sustainable Development Goals 2030 agenda.

InfoGov: Where did you grow up? How would you describe your childhood?

AG: I grew up in Mumbai, India. I grew up in poverty; we didn’t have much. We had to share one bathroom/toilet with 15 other families. I hated being poor. It was a struggle mostly. Standing in ration lines (for food) 3-4 hours every day was life.

Where did you go to university and what did you study? What was your favorite subject?

I went to Bombay University (I got a scholarship) to study engineering. I majored in Electronics and Systems Engineering. I really didn’t have a favorite subject, as all I cared about was getting a degree and getting the hell out of poverty.

Who was your favorite professor, and why?

My all-time favorite professor was Prof. Ricardo Hausmaan at Harvard Kennedy School, who teaches economics. Absolutely hands down the best professor, as I learned about his “jumping monkey” theory / global economy model, which has shaped my thinking around “trade not aid” to end extreme poverty.

Tell us about your first venture in the computer business

I started my first job working on A Series mainframes back in 1989. My first startup was NonStopWireless back in 1999, a platform to help firefighters access building schemas so that they would know where gas lines were before they entered a building.

When did you first hear of blockchain technology?

In 2013, when I was volunteering in East Africa for USAID.

We heard about your work helping underprivileged people in third-world countries. Can you tell us more about how that project developed? What were the biggest challenges?

Our company BanQu is a software-as-a-service blockchain platform that is for-profit / for-purpose and dedicated to connecting millions of people who live in extreme poverty to the global supply chains they participate in, but are left out every day. We are on a mission to empower 100 million out of extreme poverty by the end of 2023. We have 3 big challenges that we encounter and overcome every day: First, traditional aid and social enterprise models take a pity approach. We take a dignity approach to ending extreme poverty. So, the challenge is changing the mindset around poverty. Second, most consumers don’t know that their coffee and jeans and shea butter and iPhone batteries are coming from extreme poverty zones where a family of eight makes less than $2 a day. Our challenge is getting large global brands and their consumers to recognize the “last-mile” in their supply chains. Finally, while most of the world either loves or hates bitcoin/ cryptocurrencies, there is very little awareness that the underlying technology––distributed ledger technology (DLT, aka blockchain) ––is much more than that. And that non-cryptocurrency blockchain platforms like BanQu are enabling people to climb out of poverty.

Our challenge is getting large global brands and their consumers to recognize the “last-mile” in their supply chains.

How is it benefitting those who participate?

At BanQu, we are extremely blessed to have customers like AbInBev, IDB, Shell Foundation, MARS, and JTI (among others) that see the value of BanQu in their supply chains to create transparency and traceability in a way that is not only profitable, but creates a significant positive impact in the communities they operate in. As for the “last-mile” (i.e., farmers, laborers, etc.), BanQu creates an economic identity that empowers the poorest to prove they exist in the world’s supply chain with dignity and credibility. A direct path out of extreme poverty. Permanently. Access to a digital identity is a big benefit that opens up future economic opportunities.

You also have a for-profit side of your business. Can you describe the use cases you solve, and how companies are benefitting?

What other emerging uses of blockchain technology do you see as promising?

The big ones are: crop insurance for the poorest farmers, lower cost of credit for marginalized communities, education certifications for refugees and the displaced, health records for the poorest etc.

What advice do you have for organizations wanting to explore the use of blockchain technology?

The time for “wait and see” is over. You have to start. Start small, but start.

Who is your most inspiring business leader and why?

Mother Teresa. Because she saw Christ in every soul.

Most consumers don’t know that their coffee and jeans and shea butter and iPhone batteries are coming from extreme poverty zones where a family of eight makes less than $2 a day.

If you could have dinner with three people, living or dead, who would they be and why?

Rosa Parks, Mother Teresa, and Winston Churchill. Because each of them had three traits I value: resilience; fought for justice and equality for a better world; fearlessness.

What is your favorite way to spend your free time?

I haven’t taken any time off since the end of 2012. But if I had to, I would sit in my backyard staring at the hills and trees and meditating.

What is the best vacation spot you have found?

Haven’t found one yet. But my absolute favorite city in the world is Bogota, Colombia, because it’s where I experienced the freedom of having my own toilet for the first time in my life. I was 22 years old.

Ashish Gadnis is the co-founder of BanQu Inc., the first ever blockchain supply chain and economic identity platform for refugees and people in extreme poverty. An award-winning financial tech company with a social cause, BanQu strives to eradicate poverty by connecting the “unbankable” to a secure, portable digital economic identity — simply through a cellphone app. This revolutionary technology provides a pathway into the global economy, creating Dignity Through Identity™ for people worldwide.

Growing up in poverty in Bombay, Ashish never forgot how it felt to stand in food lines to survive.