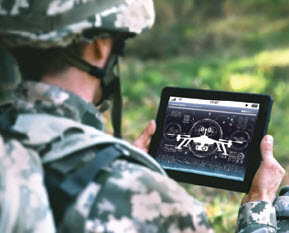 Future of Defense is AI

Security experts contend that AI could be next disruptive defense technology. Aspects of AI, also known as ‘Algorithmic Warfare’ could potentially replace major structural concepts such as network-centric warfare (NCW) concepts and these could lead to enhanced information gathering and processing capacity.

Most investment in AI has come from China, Russia, and the US, with all three competing in AI development. The three countries have declared strategies to achieve ‘offset advantages’ through robotics and AI.

In July, 2017, China announced plans to become the world leader in AI by 2030, and create a $150 billion AI industry. Russian President Vladimir Putin noted in September 2017, “Whoever becomes the leader in this sphere will become the ruler of the world.” AI can be used for a range of military applications, although its likely near-term benefit is to quickly and efficiently process large volumes of data to aid military personnel in making decisions derived from the identified patterns, relationships, associations, and correlations.

The Joint Artificial Intelligence Center (JAIC) was formed by the US Department of Defense in June, 2018 as the focal point for carrying out its AI strategy and will oversee about 600 projects. As well as enabling consistency of approach, technology, and tools, JAIC’s work will complement efforts by the Defense Advanced Research Projects Agency (DARPA), DoD laboratories, and other entities focused on longer-term technology creation and future AI research and development.

Attempts have been made to use AI with ‘swarming’ attacks to overwhelm adversaries. Small unmanned aerial vehicles (UAVs) and unmanned ground vehicles have the potential to co-ordinate with one another using AI. They offer the ability for large-scale intelligence gathering and to scale physical mass and battlefield points of presence, increasingly independently of the numbers and locations of human combatants. Combat vehicles with more autonomy require less human operation, and decreases the demand for bandwidth (which is a key issue for remotely operated vehicles). The more automation a vehicle has, the more likely it can operate in areas with a “contested or congested electromagnetic spectrum.”

As AI expands, the demand for professionals has increased making it a bourgeoning opportunity for IT professionals and recent college graduates.