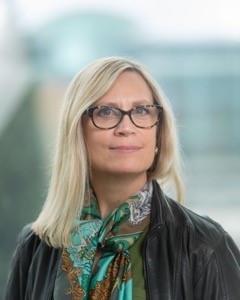 Vicki Lemieux is an associate professor of archival science at the iSchool and lead of the Blockchain research cluster at the University of British Columbia –Canada’s largest and most diverse research cluster devoted to blockchain technology. Her current research is focused on risk to the availability of trustworthy records, in particular in blockchain record keeping systems, and how these risks impact transparency, financial stability, public accountability and human rights.

Where did you grow up? Go to school?

I grew up in Canada. My early years were spent in Ontario, but then we moved out west when my father obtained a medical residency in Calgary, Alberta.

What were your favorite activities as a child growing up?

I loved the outdoors, whether playing outside with my friends or going camping with my family. I also had an early love for science, so would play with my chemistry set or microscope (catching bugs to look at them up close), or take apart clocks and radios to see what was inside. Unfortunately, I wasn’t very good at putting them back together again!

What motivated you to pursue a doctoral degree?

Curiosity and the quest for knowledge. I find archival science fascinating and had a desire to delve into it more deeply.

What were your research interests when you pursued your doctorate?

I’ve always been interested in demonstrating the wider social or organizational significance of managing records. When the Jamaican banking crisis occurred while I was living in Jamaica, knowing the condition of records management in the banks, I suspected that there was a connection between what we now call Information Governance and weak risk management and internal controls at the banks, which ultimately contributed to their collapse. The dynamic that I studied for my doctorate would, as it turns out, be played out ten years later on a global scale during the global financial crisis of 2007-2008.

What do you like most about teaching at the university level?

I really like when I can inspire students’ learning––either in class or through working with them on a research project. I also like helping them make industry or community connections that can help them land their first “grown up” job and launch them into their careers. I experience a great deal of joy when a student comes back to tell me that what I taught them, or the opportunity that I opened for them, has really made a difference in their lives.

When did you first become interested in blockchain technology, and why?

I first became interested in blockchain technology at the end of 2015. I happened to be reading the Financial Times and came across an article about how the government of Honduras was going to put all of its land records on a blockchain. It sounded preposterous to me, but I recognized that here was a technology that could be very disruptive to records management and archives. I had to investigate. When I started to look into it, my IT security background came in handy. Since blockchain uses cryptography, I was able to understand how it worked and to analyze the solution that the company working with the Honduran government was proposing. I concluded that it wasn’t very good from a recordkeeping perspective (which I wrote about in my article in “Trusting Records: Is Blockchain Technology the Answer?”). However, I also recognized the potential of blockchain technology, which, if properly designed, could be extremely beneficial in a number of ways. And, at its core, it is a recordkeeping technology—a ledger—which interested me.

What are the most unique uses of blockchain technology you have seen?

I can’t claim to know every application of blockchain these days—there are so many! But the use cases that I find the most unique and compelling are those that aim to give the individual data self-sovereignty; that is, greater custody and control of our data and how it’s used. I guess that’s why I’m working on projects that focus on this aspect of blockchain technology—in healthcare and in the management of data relating to Canada’s First Nations. Aside from this use case, and on a more frivolous note, crypto-kitties are pretty unique . . . and fun! They’ve opened up a whole new world of natively cryptographic tradable assets which is contributing to the growth of crypto-economics.

What do you see the implementation of blockchain technology looking like in 5 or 10 years? How will this change the way the world works?

Making predictions is always a mug’s game and inevitably people get it wrong, so I’ll just say what kind of a world I’m seeking to create by exploring blockchain technology. I’d like to see it be used for positive social transformation—like data self-sovereignty—so that we have greater privacy, security, and control of our data. If you think about it, if each individual is in control of their data, it will be pretty transformative and powerful. It will also certainly transform the role of records professionals. Reimagining our roles in a world of self-sovereign data is bound to be interesting. To get to this longer-term vision, we’ll have to solve a number of open issues with blockchain technology, such as devising less environmentally damaging consensus mechanisms without compromising on trust, scalability, governance without constant forks and fits, scalability, and making cryptocurrencies and blockchains understandable to and usable for all.

A vexing issue with blockchain for records managers is the ability to execute disposition: that is, discard or destroy records that have met their lifecycle requirements. Have you and your colleagues determined an approach or solution that satisfies disposition requirements?

Yes, agreed. This has become a vexing issue. However, I believe this is because blockchains were never designed to store large amounts of information—they were initially designed to store very simple cryptographically encoded records of cryptocurrency financial transactions. In other words, a blockchain is not a content management system. Some designers and developers have been using blockchains this way, however, embedding all kinds of cleartext messages, metadata about transactions, even large files of data, some of them containing personally identifiable information. This not only creates a record retention problem, and a data protection and privacy compliance problem, but it causes bloat in the blockchain. In my view, it’s better to keep transaction records and personally identifiable information off the blockchain. How this is best done requires paying careful attention to data and records architecture and design. For example, one possibility is to link the ledger entry to a transaction record using a cryptographic or hash link that points to an external data store where transaction records are held. To meet records retention requirements, the cryptographic link can be severed or rendered unusable when the time comes, and the ledger record can be “pruned” (which is done even in immutable ledgers in order to save storage). Determining the best solution requires applying knowledge of recordkeeping and knowledge of different blockchain systems to arrive at an optimal data architecture and solution design. There’s no simple, “one size fits all” answer.

A blockchain is not a content management system. Some designers and developers have been using blockchains this way

Who is your favorite writer, and why?

Right now, I’m enjoying reading Yuval Noah Harari’s books. I particularly like Homo Deus: A Brief History of the Universe, which explores the long-term future of life and really inspired me to think about the future of recordkeeping. I discussed these ideas in a talk I gave at the UK National Archives last spring called “Datafication, Distribution and the Future of Archival Science in the Age of Homo Deus.” You can listen to it here: https://media.nationalarchives.gov.uk/index.php/big-ideas-datafication/.

When and where are you happiest?

I’m a scholar, so I’m happiest when I’m reading something interesting, reflecting, and writing—things that I find I frequently do not have enough time to do!

What do you like most about living in Vancouver?

Vancouver is a truly naturally beautiful city—we are surrounded by sea and mountains, and the weather is temperate. Not like the typically cold Canadian winter. I never get tired of the view!

VICTORIA L LEMIEUX, BA, MAS, PHD, CISSP, is an associate professor of Archival Science at the iSchool and lead of the Blockchain Research Cluster, blockchain@UBC at the University of British Columbia – Canada’s largest and most diverse research cluster devoted to blockchain technology.  She can be contacted at v.lemieux@ubc.ca