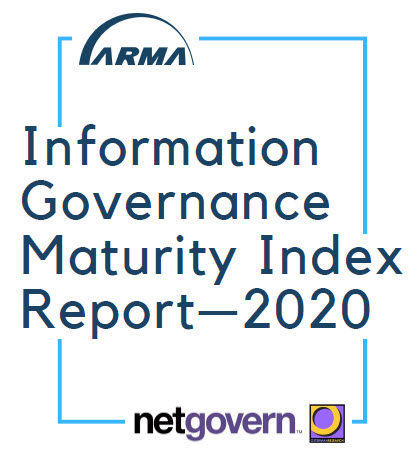 In March, ARMA International released the results of the first of a planned annual series of IG surveys, “IG Maturity Index Report – 2020,” sponsored by NetGovern, a Montreal-based software company that specializes in email and archiving, which recently added a file analysis tool to its offerings.

NetGovern used to be called NetMail, and most of their business originated from supporting email for Novell NetWare. The survey was conducted with the assistance of Mike Osterman of Osterman Research, a respected source which specializes in writing white papers for software vendors.

The presentation of the results during a Zoom webinar was executed well, led by ARMA’s Nick Inglis, executive Director of Content and Programming, and Ann Snyder, Manager of Content Development. But the approach, design, and results of the survey turned out to be self-serving for ARMA and NetGovern, and not the ARMA community or broader IG market. Those on the low-end of the maturity scale are potential sales prospects for NetGovern, and training prospects for ARMA.

Essentially, the survey was designed to measure the maturity of items that tie into ARMA’s new and unproven IG Implementation Model. The 2020 report states additional ARMA training classes will be developed, (“… forthcoming educational and training materials [from ARMA] will target the seven areas of the IGIM and the elements within each.”)

IG World believes the 2021 IG Maturity Index Report could be improved by the adding more questions, and taking an approach which addresses the following issues with the 2020 survey:

So ARMA gets an “A” for taking some initiative, but a C- on the results of their effort.